United will use their Europa League last-16 meeting with AC Milan to watch Turkey midfielder Hakan Calhanoglu, 27, who is out of contract at the end of the season. (Express)

England striker Harry Kane, 27, is set to stay at Tottenham for at least another year. (Telegraph)

Borussia Dortmund chief executive Hans-Joachim Watzke says the Bundesliga club may have to ‘give up a player’ due to the financial implications caused by the pandemic. (Handelsblatt, via Manchester Evening News)

Arsenal’s France striker Alexandre Lacazette, 29, has emerged as a summer target for Ligue 1 side Monaco. (Mirror)

Barcelona presidential candidate Toni Freixa claims he has an agreement to sign two top players who want to win the Ballon d’Or should he be elected. (El Larguero, via Mail)

Spanish defender Hector Bellerin, 25, could leave Arsenal this summer as part of an agreement with manager Mikel Arteta. (ESPN)

Liverpool are monitoring the situation of Real Madrid’s Brazilian forward Rodrygo, 20, who could be allowed to leave the La Liga side for £50m in the summer. (Diario Gol, via Team Talk)

Chelsea boss Thomas Tuchel has been given the green light by the club to sign in-demand Norway striker Erling Braut Haaland from Borussia Dortmund. The Bundesliga club, however, doubt the 20-year-old will want to join the Premier League side. (Bild, via Sun)

However, Haaland will likely decide to spend another season in Germany. (TalkSport)

Arsenal’s Brazil winger Willian, 32, says he wanted to stay at Chelsea but the Blues would only offer him a two-year deal, rather then three. (UOL Esporte, via Mail)

Austria defender David Alaba, 28, who has told Bayern Munich he will leave at the end of the season, is intent on joining a club that will play him in the centre of midfield rather than defence. He has been linked with Real Madrid, while Chelsea, Liverpool and Manchester United are also interested. (Le Parisien, via Star)

Signing US international midfielder Weston McKennie on a permanent deal from Schalke is a priority for Juventus despite the 22-year-old having yet to trigger a clause in his loan which obliges the Turin club to buy him. (Calciomercato – in Italian)

Bayern Munich are the latest to distance themselves from a move for Norwich City’s Max Aarons, with Everton’s hopes of of signing the 21-year-old English defender boosted as a result. Norwich’s £35m asking price for Aarons was previously reported to be putting Manchester United off a bid. (Bild, via Sport Witness) 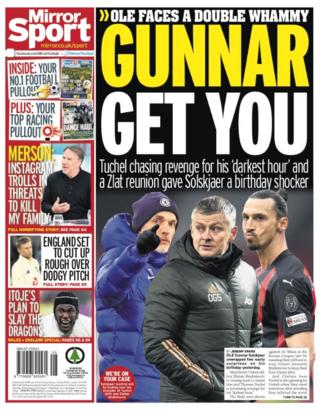 Saturday’s back pages: Mirror Sport – ‘Gunnar get you’

Interview: Gremio scout Erivelton Lima about how to become a scout...